That title might lead you to believe that this will be some post about how much difference my newly lost weight has made in my riding, but that would be untrue, as to the best of my knowledge, I’ve not lost an ounce off my fat ass post surgery. I’ve been doing physical therapy and strengthening work, and I’m way better, but that’s another story. This one is more of a bike tech geeky tale about how things change over time. So the weeks I’ve spent riding my KICKR have convinced me that I want to ride with a power meter which is something I’ve resisited for years, using various rationales to justify. They are expensive, they are finicky, they are heavy, I just like to ride, I don’t want to be a slave to the computer, and the most common, I’m just not that much of a data geek. So while some of those were true at some point, they were expensive (I paid 200.00 with free shipping for this stages though), these blue tooth and ant meters just work, no finickiness at all, this one weighs 38 grams, though there might be some validity to the freedom argument. Despite all those arguments back and forth the last he was reason was the most decidedly untrue, I’m definitely a data geek through and through. So I had to weigh some stuff out, I ride Campy on my road bike, and an Ultegra/105 mix on the cross bike. I have every intention of switching to Ultegra for my road bike, but probably not until I buy a new bike next year, so I was looking for something “cross platform compatible”. I ended up going with an FSA 386evo crank in 50/34 on the road bike which just happens to be the exact same crank albeit in 46/36 on my cross bike. So if you’ve been keeping up til now, you may have put together that with about 45 seconds and a hex head wrench, I can use my power meter on both bikes. See, yeah, method. 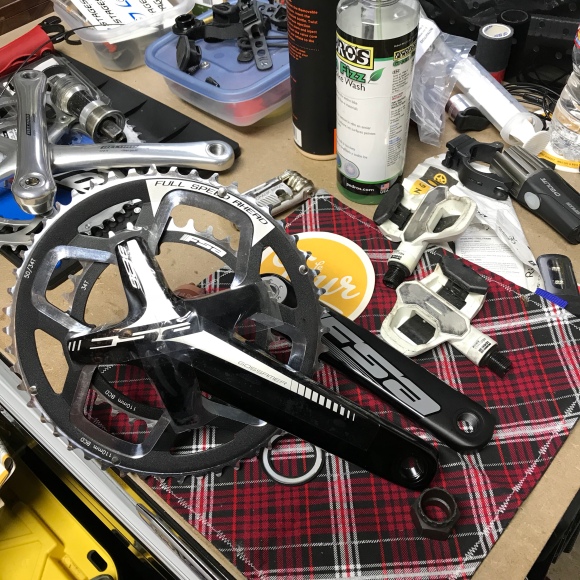 “But Dave” you say, “why would you take that beautiful and light Record crank off to put that boat anchor of an FSA on?” Well, I was somewhat worried about that too, but allow me assuage your concerns the same way I did my own. First, no one makes a crank based power meter for older alloy Campy. Simple fact. Sure there are other options, pedal based, hub based, etc, but then we’re right back into the above problems. So the Campy was out no mater what, so I was stuck with the “heavy” FSA alloy, that also conveniently worked with my cross bike. Out of curiosity and at the prompting of my youngest son, we weighed both cranks complete, including their respective bottom brackets before I installed the new one, and quite surprisingly, the FSA was exactly 2 grams heavier than the Campy, and that is with the power meter strain gauge installed. So if I am to believe the literature from stages, the FSA is actually 38 grams lighter than the Record. Now I will say that there is an elegance to the polished alloy of my old cranks lacking in the new one, but never fear, the Campy will find a new home, on my old Pinarello, where they will be most appropriate. The FSAs are a simple polished black that kind of disappears into the bike, which is just fine aesthetically. They are undoubtedly significantly stiffer, and this should also do away with an annoying square taper creak I’ve had for about 4 years as well. 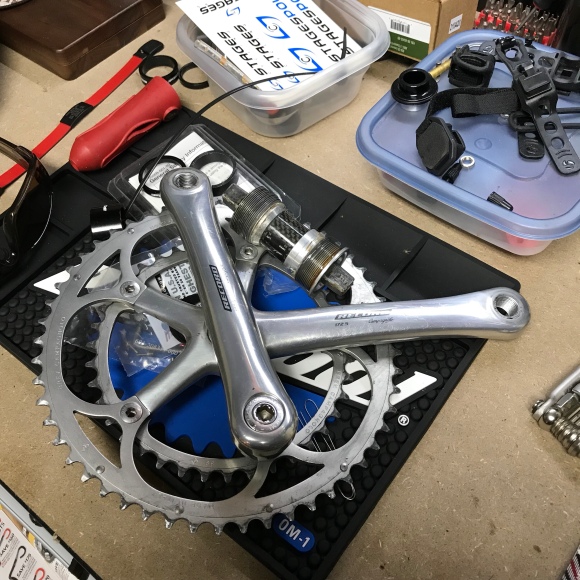 One reply on “Power and Weight”

Welcome to the world of power. Enjoy and learn, but don’t let it consume you. 🙂