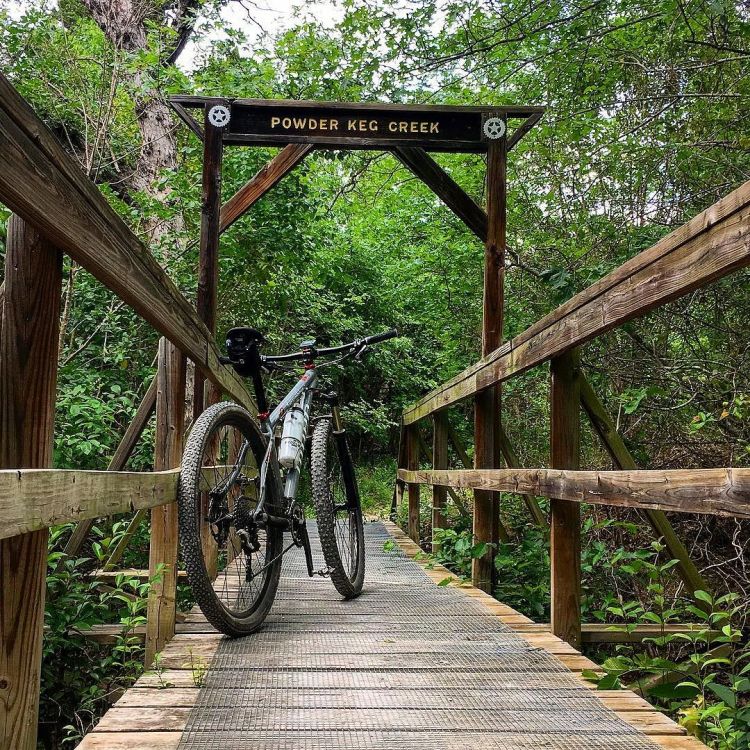 I haven’t been riding the MTB much lately (like AT ALL), so Monday I had to be in Waco for work, I threw it in the truck, hoping to have a few minutes to escape and knock out a few miles. Fortune favored my foolish self, and I finished up with 3 hours to play. I have never ridden there at all so I swung by the most recommended bike shop by guys on bikemojo, its called “The Bear Mountain“. I can’t recommend the shop enough. The staff was awesome, took some time to talk to me about the trails, where to park (where NOT to park) and even how to beat traffic getting from there to the trail-head. They had maps of the local trails, which not a single shop in Austin offers, (are you listening ATX??) and literally everyone in the shop had a little input about good lines and segments. They also had President George W Bush’s old Trek, which was cool to see. Apparently he has his bike maintained there. If you’re in Waco and you aren’t a member of their cycling club, you’re wrong. These guys do it right.
So, I set up at Pecan Bottoms, which they explained to me is basically the “low ground” (hence the name “bottoms” I guess) as I like to make my climbs on the way out rather than when I’m crushed on the way home, especially when I’m unfamiliar with the trails in general. I thoroughly enjoyed the ride, there was a lot of climbing, the difficulty of which Strava leaves out, as its only 100 feet or so at a time, but at a 12-15% grade. I got in about 10 miles total and I was good and smoked at the end. I was really happy that I saved half my sandwich from “Schmaltz’s” to eat when I got back to the truck, because I was starving.
**Some Trail Notes-
1. The maps show water points along the trail, however none of the ones I found on the trail were functional.
2. The trail markings are very good when they are present, however they are missing or incomplete in many areas, which in their defense, look to be pretty new and perhaps not marked yet. (even the bad ones are marked better than any in the ATX)
3. Most of the trails showed up in the maps on my ELEMNT, even the newer ones, which l assume is due to open street maps.

I like to do things on two wheels. View more posts